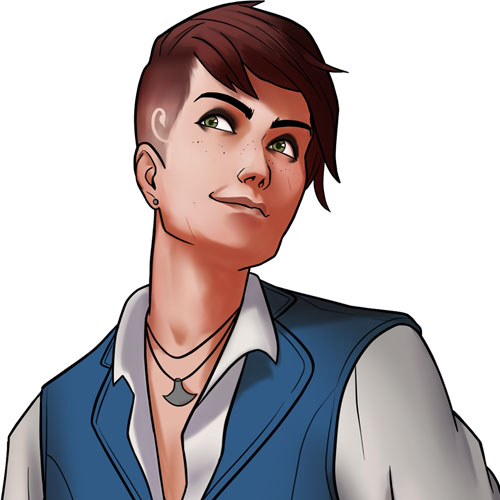 Dagga flipped a coin and then put it back in their pocket, without even glancing at it.

If you believed others, the whole point of games of chance was to see who won and who lost. After all, most such games had bets riding the lines and those were often the only real things of interest in such a game. Dagga, however, felt differently.

True games of chance were more interesting in how chaotic the result could be.

One could argue that such chaos was only evident if one knew the result, thus arguing that knowing it was still of utmost importance to the game. However, the reality was that, for some, like Dagga, it was truly the unknown that was fascinating, and that not knowing wasn’t trumped by the knowing of the result.

Certainly there were plenty of coin tosses that Dagga knew the result of. It was one of their favorite ways of making an arbitrary decision, but they often flipped a coin for the sheer thrill of it, and that thrill wasn’t ruined by not knowing the result.

How many times had Dagga unknowingly flipped heads? Tails? It was a question that was interesting enough in its own right without an answer.

There were, however, other questions that did demand answers. Like whether or not they would ever meet their sister.

Their ship, the Manticore, had docked in Trueen for the night. While most of the crew was off gambling, or finding other delights, Dagga’s father, the Captain, was once again meeting with strangers. They weren’t meetings that Dagga was privy to, which was infuriating, especially since they had managed to work their way up from cabin boy to First Mate on their own merits, earning their father’s trust rather than merely basking in it, and yet that trust clearly didn’t extend to all things.

Dagga knew of their sister, which they supposed was a good deal more trust than they could have had. From what Dagga knew of the situation, it was likely that their sister didn’t even know of Dagga at all, and that was a fate that Dagga considered worse than death. Or maybe it was the knowing that was that bad.

Their sister could die in peace, never knowing that they had a sibling, no, more than that, a twin, out there that she had never met. Whereas Dagga would potentially have to face death not knowing whether or not their sister would have loved them as others’ sisters clearly loved them.

But, if Dagga’s sister shared the same, difficult-to-explain “feelings” that Dagga often felt, then surely the not knowing was just as tortuous for her, for she wouldn’t even understand what it was that she was missing, only that there was something, a profound half of her that was missing from her life.

It was partly from these feelings that Dagga’s father even told them that they had a sister.

Growing up on a pirate ship was never easy, but for Dagga it had initially been a very isolating experience. Not only had they been a child surrounded by actual grown men and women, they had always felt a bit different, like a piece of them wasn’t there. So Dagga had been slow to form relationships, and might still have been a lowly cabin boy to this day if it hadn’t been for that life changing conversation four years earlier.

Dagga looked up at their dad almost as if not seeing him, such was the chaos of their thoughts, the turbulence seemed to drown everything else out.

“That, see, that right there. That’s what I’m talking about. Might as well be talking to the wall for all the good it would do me. Is that all you are, lad? A wall?”

Dagga’s father was rarely cruel. In fact, in most cases he was a rather inspiring figure in their life, even if he was a criminal. But there were a lot of hard lessons to learn when you grew up as a pirate, when the things you did and saw were nearly never on the same side of the law. But, all things considered, Dagga’s father had sheltered them from most of that. Their crew was full of malcontents, but almost none of them were actually persons of ill-repute.

They were all criminals, certainly, for they stole goods and smuggled them, and neither of those things would ever be legal, but they were very particular about who they stole from and what goods they smuggled. They would never take from those who would be ruined by it, and they never transported people or ‘dangerous’ drugs. The last bit was often a common joke among the crew, because they definitely transported and imbibed alcohol, which was dangerous enough to affect a man’s judgment, but it seemed often the exception to the rule for they never transported any sort of weed, plants which were smoked in order to gain their effects.

That fact was doubly hilarious given how many of the crew, including the Captain, “secretly” partook in the smoking of certain weeds, such as Cardenweed, for its famously soothing effect.

“I’m not a wall,” Dagga muttered, refusing to engage with the actual question.

“Well, tha’s a shame. Right now the wall be a bit more useful, it keeping the wind out of my face.”

Their airship was at cruising altitude, which often meant that being out on deck was an unpleasant experience. On the best of days it was merely breezy, but in heavy cloud cover they sailed in a perilous-to-navigate fog. In outright storms, they were often better off sailing the rough seas or risking an unpleasant “dry landing” in order to weather out in some field, or, if they were lucky, with some mountain to bear the brunt of the weather’s displeasure.

“What do ya need?” Dagga asked, standing up a bit straighter. If this was a round-about way of asking them to get back to work, that was a far more desirable outcome than the conversation itself.

A rough, calloused hand reached out and lifted Dagga’s chin, forcing them to look up into the bright, impossibly blue eyes of their father. He was a handsome man in a roguish way. There were scars on his right cheek and left brow, and his beard was almost always in some state of semi-shaven, but he had a good strong jaw, bright, inquisitive eyes, and a distinguished nose that made it difficult for him to get mistaken for other men.

Dagga’s father was large, too. (Dagga now stood some seventeen and a half hands tall, but their father was a full head taller than them, or another two or three hands easily. At the time, however, Dagga would have been pushing it to say that they came up to their father’s chest.) He had the brawny bulk of someone who had spent his entire life working on ships, something that Dagga hadn’t seemed to inherit, in spite of also living their whole life on ships.

“No ‘sir’ this, or askin’ about work.” Dagga’s father pushed along, determined to stay the course, “I be your father, an’ right now I deserve ta be called ‘dad’ or ‘pa’ or even just ‘da.’ I be tryin’ ta help ya, you see?”

It didn’t seem to Dagga that talking about their feelings was going to help all that much, but their dad was persistent, one had to be in order to Captain a ship, and it was clear that he knew how to navigate this particular path. Or, if he didn’t, he sure knew how to apply a Captain’s firm swagger and pretend that he knew how.

“I’m not sure, ta be honest.” Dagga began, they felt the suddenness of tears welling up in their eyes and immediately felt ashamed by it, a sailor knew better than to cry. Yet, their father wrapped them up in a hug anyways, just as he had always done when they were little. It had been awhile since they’d last felt the fierce comfort of this particular embrace.

“Ya tell me that mom’s alive, but we can’t see her. I…” Dagga buried their face in their dad’s chest for a moment, stopping, not sure how to phrase the true crux of their frustration. After a moment though, and another breath, “I have a brother or sister, don’t I?”

Dagga pushed back from the hug so that they could meet their father’s eye. Quartermaster Ings said that a man couldn’t lie to you if you looked them in the eye. That was patently untrue, especially since Ings had taught Dagga how to lie, including with one’s eyes, since they could walk. Surely their father was an accomplished liar too, but this moment was too raw, too vulnerable, and somehow, Dagga felt that if their father lied right then, they’d know.

“Damn ya,” their father said, mussing with Dagga’s hair with one hand now that it was no longer tied up in the business of hugging. “Ya have your mother’s intuition alrigh’. Aye, ya have a sister.”

Dagga had managed to get a little bit more out of their dad, where their mother and sister lived, even how their father met their mother, but the crack that opened up was the slightest opening of air. It hadn’t been long before their dad had consigned further questions to be in the realm of far too painful to talk about. Dagga knew that for a lie, their dad never seemed to back down from any sort of pain, save the particular pains of the past.

So Dagga knew that their sister and mother lived in the city of Nairth. That their mother was a serving girl from, of all places, Trueen, who had been taken in by their father’s “incredible charm and fantastic good looks,” and that they had kept Dagga and their twin sister separate from one another for each other’s safety.

That last little revelation had been where the probing ended. And no matter what tack Dagga had tried over the past four years, they’d never been able to get their father to reveal anything further about why they and their sister were in danger and why they were safer apart than together. However, the meetings with strangers had only truly begun in earnest a year or so after that conversation and Dagga was convinced that the meetings had something to do with their twin and other parent.

Yet it was only luck, a particularly vulnerable moment, that had opened their father up before and it was likely only luck that would open him up again. Dagga wasn’t sure how many times they could flip that coin, though. The days of crying over it were far past over, and though Dagga’s father trusted them with his life, he definitely still didn’t trust them with his secrets either.

The darkness closed in around them. The streets were well-lit for the night, but it was still night and the shadows pushed in everywhere they could. Occasionally someone would call out to them. No one they knew, but business was all about making friends with strangers and so the strangers kept calling.

Eventually Dagga came upon a shop with a sign composed of a sigil, an eye enclosed in a circle which was topped by a cross.

The other sailors often came to Madame Frula’s to get their fortune’s read before they went on a sail. Dagga hadn’t been before, but perhaps this would give them the answer. They took the coin out of their pocket and looked it over. It was time for another coin toss, but Dagga had no idea how the coin would land.